1.  (T or F)  Open markets with free exchange and sound money encourage activities which make efficient use of resources to satisfy consumer demand in a self-optimizing manner.

2.  (T or F)  Under a free and open market, an obviously highly profitable activity will have many market actors vying with one another to engage in this trade, ensuring that the market is well served.

3.  (T or F)  Government decisions and actions with economic consequences will typically not be undertaken according to the optimizing properties of free exchange because they are political in nature and less sensitive to economic forces.  Economic decisions made on the basis of such government policies will therefore likely be suboptimal applications of resouces with respect to what would prevail in a free market.

4.  (T or F)  The Chinese government owns trillions of dollars worth of foreign reserves, and continues to acquire them.  Without these purchases, the yuan would have a much higher exchange rate against most other currencies, both in the recent past and today.

5.  Which of the following graphs depicts the exchange rate between the Chinese yuan and the US dollar? (graphs from Google finance): 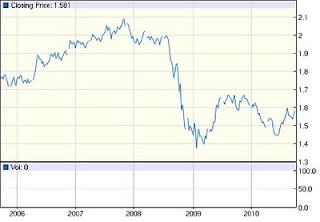 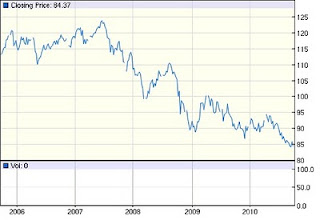 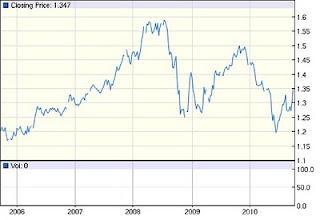 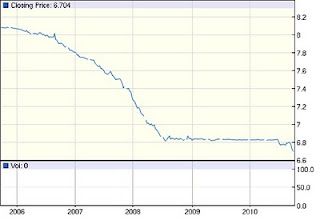 7.  Given your answer to question 6, foreigners will continue to buy Chinese goods instead of other goods after the Chinese government stops interfering with exchange rates because --


8.  Given your answer to question 6, Chinese consumers will buy Chinese produced goods instead of foreign produced goods once the government stops interfering with exchange rates because --

A.  Again, Chinese goods will be able to command a premium over foreign goods because of their high quality.
B.  The Chinese economy will become a closed and repressive system that will keep foreign goods out by force.  Chinese consumers will not have a choice.  This will lead to high efficiency in resource allocation, rapid economic development and prosperity.  Obviously.  Weren't you paying attention on the first few questions?
C.  Given the choice, Chinese consumers will not strictly buy Chinese goods if foreign produced goods are cheaper and of good quality.
D.  Chinese goods only get cheaper and cheaper.  Nobody can compete with them.

A.  According to the most basic laws of economics and plain common sense stated unequivocally in the first few questions, one would surmise that internal markets and distribution systems are unable to develop because they are unprofitable.  If they had been profitable, they would have developed already.  Unless those fundamental factors change, they will never develop.  Oops, I mean, go China!
B.  Those slanty eyed people are like plants -- all they need is dirt and water to survive.  They don't consume anything and save all their money no matter what.  That's why they have to sell stuff to us.  To make money.  They like money, and we have it.  Yeah.
C.  The Chinese government has rendered internal trade unprofitable by tampering with the exchange rate.  Once it stops, internal trade will develop naturally because Chinese money will be worth more and domestic consumers will be able to compete with foreign consumers to afford domestically produced goods... that are still about the same price because they are also priced in yuan... and have gotten more expensive relative to foreign goods... wait a minute... can I change a few answers?
D.  You and your silly questions.  What are you trying to prove?


10.  If Chinese goods cannot compete effectively in either foreign or domestic markets without resorting to currency manipulation, what does that mean?

A.  That China should continue manipulating its currency to remain competitive.  Duh.
B.  That China's apparent standard of what constitutes an acceptable level of 'competitiveness' is wrongheaded.  Actually, all healthy economies face competition from within and without their borders, and their imports and exports should roughly match to prevent buildups of debt obligations and uneconomic distortions of industry.  National prosperity is more a question of per capita productivity and high levels of employment than displacing competitors through state power.
C.  That there is nothing special about China's economy.  It obeys the laws of economics like any other.  It is perfectly normal, except for the unusual aggressiveness being used by the state to distort what would otherwise be healthy growth and development.
D.  How dare you!  Who do you think you are?


11.  Given your answers to the previous questions, China's industrial and manufacturing capital base will be worth _______ after normalization of exchange rates because ________.

A.  More, that's just the way it is.  We're talking about China here.  They're the best manufacturers in the world.
B.  More, because they'll be selling lots more goods...to...well...somebody!
C. Less, China should never have subsidized exports by tampering with exchange rates and imposing trade barriers because this produced a horribly inefficient and unsustainable system.  That manufacturing base ate up resources that should have been applied towards other activities, and now the system is dangerously distorted. There will be massive surpluses in the subsidized manufacturing and industrial markets and dire shortages in others.
D.  Less, I'm calling my broker!


12.  Once the Chinese government ends its policy of export subsidy --

A.  Peace and prosperity will break out everywhere.  Utopia will have been realized.  The commies are geniuses!
B.  Internal consumer markets will develop to take up the slack.  Because.
C.  La, la, la, la!  I'm not listening!
D.  Oh crap.  It's going to be a disaster.  There will be a fantastic correction in prices and markets in the short term.  But this is what must happen if there is to be sustainable wealth creation and economic development in the long term.  The longer this policy is delayed, the more destructive behavior accumulates and the greater the correction will be.


13.  If the Chinese government continues to subsidize exports --

A.  Chinese manufacturers can continue to operate almost exclusively as exporters, selling goods to foreigners profitably and sustainably forever and ever.  It's a brilliant plan.  Imagine the factories and industrial development that will take place.
B.  The Chinese government wouldn't do this because it will make the Chinese rich to stop selling to foreigners and start selling to themselves -- in exactly the same way it made China rich to only sell to foreigners and not to themselves before.  They used currency manipulation and trade barriers as an export subsidy before, and they can use consumption subsidies and trade barriers to create domestic consumer demand now.  It will be just like the stimulus efforts the whole world has used to get out of the global recession.  Get it?  It really isn't that hard.
C.  China will continue to acquire debt that foreigners are unable to repay.  Because the foreign entities cannot sell goods into Chinese markets, they are unable to work off the debt no matter what they do.  China will become rich and powerful by practicing mercantilism and bankrupting its trading partners, just as the US did to several European nations during the 1920's and became rich during 1930's as a result of foreign defaults.  What's that?  Great Depression?  Never heard of it.
D. Oh crap.  It's going to be a disaster.


14.  If China pursues a strategy of monetary expansion and mass currency devaluation rather than purchase of foreign assets to maintain its export edge --

A.  That's a clever alternative I hadn't thought of.  That way the foreigners can't even default!  Imagine the possibilities!  Count me in!
B.  It could help drag the entire world into an mass, global devaluation campaign, seizing up global trade, inciting mass inflation, poverty, unemployment, social instability, and possibly violence.
C.  The average Chinese would experience the debilitating effects of mass inflation.  He would not realize the benefits of his productivity gains accrued over time and would be reduced back to abject poverty.  His condition of permanent servitude under this economic model would be clear for all the world to see.
D.  There really is no easy solution, is there?

A.  Monetary tampering and economic mercantilism are the ticket!  Japan and Germany are global superpowers because of it and China can become so, too.  Never mind their declining populations, cultural stagnation, and Japan's ongoing twenty year recession.  That's a side issue.  The US should take a lesson from the mercantilist playbook.
B.  China has a fundamental problem with economic development outside the capacity of government or central bank monetary policy to deal with.  These institutions have no power over such forces, except to make things worse.  Even if they intervene to make things look better in the short term, the inefficiencies and distortions they create delude economic actors and waste resources.  When they come unwound, fantastic losses are incurred and dreams destroyed.  Things can get very ugly.  The last thirty years of Chinese trade and currency policies have created a very dangerous situation that must resolve itself in the near future and threatens to tear the country apart.
C.  Mercantilism is a destructive trade practice, both to the mercantilist state and its trading partners.  Accounting sleight of hand cannot change underlying market realities, but it can incentivise destructive behavior and create an illusion of temporary profits.  In the long term, these realities must eventually be revealed.
D. I'm scared. Hold me.