I am very sorry to do this, but when one has made a serious mistake in public, one must make a public admission.  M2 has grown, in addition to M1: 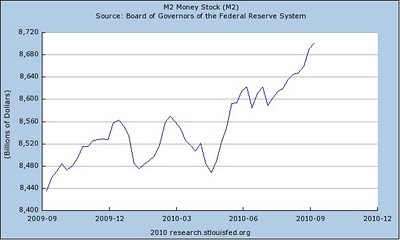 It is only growing from a much larger base, so that proportionally the change is smaller and I did not notice it on casual inspection.  I should have been more careful.

What does this mean?  What it means is that the monetary aggregates are increasing because of new lending.  The accumulating bank reserves which have caused so much consternation are finally being lent out.

To most people, this will be a hopeful sign.  It means that markets are returning to 'normal.'  To me, this is a scary sign -- that inflation may have finally made its return.  But I suspect we'll all be scared by the prospect of 'recovery' in due time.

Several other recent developments support this conclusion:  gold has hit a new all-time high, and interest rates have finally turned around in recent weeks.  The NBER announced an end to the recession and the onset of recovery as well.

The moment of truth may have come, and we will find out who was right in the debate of the deflationists vs. the inflationists.   The deflationists predicted that the banking system would not be able to increase the money supply because the FED would be 'pushing on a string' by increasing the monetary base, unable to increase bank lending in a market that wanted no more debt.  Meanwhile, debt paydown would shrink the money supply irrespective of the efforts of the central bank.  Until this point, that assertion had looked credible to some people, however, this development definitively contradicts it, supposing it continues.

The downturn in the monetary base may be signifying that the FED is attempting to sell assets to prevent the inflation from becoming excessive.  The problem is that it has already created so many reserves that even with a major decrease in the BASE, inflation could still continue apace.  I and other inflationists have predicted that it would be unable to contract the monetary base effectively because many of its assets are now so devalued.  Of course, the FED now has another tool to discourage new lending -- increasing the interest paid on reserves.  But shrinking the money supply itself will be difficult.

What does this mean for markets?  If it indeed continues, it means an end to 'muddle, muddle, toil and trouble' and the beginning of the 'inflationary period of reckoning.'  I was hoping for a longer period of 'muddle,' but that may not be in the cards.  We'll have to see how the FED responds, but I suspect that if it really wants, it can put an end to this and send us back into 'muddle,' or it can allow it to continue.  The FED is setting the monetary agenda, and we'll just have to wait and watch what it does.

Again, I apologize for the confusion and contradictions.  And, of course, the uncertainty.  It's a tough business.