What? Inflation? Or Why I Prefer Gold Over Silver

Markets have been rather tumultuous over the last month or so. 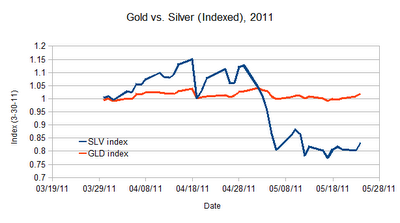 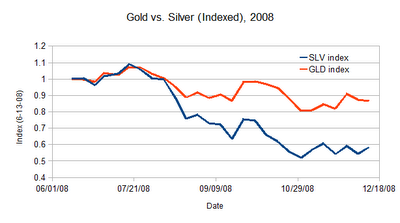 Note that in both cases, silver's precipitous move down was preceded by a precipitous move up as well, such that overall movement is not as bad as it looks in the chart. Still, for silver investors, it has been a stomach churning ride. Gold has also had some big moves of late, but they simply don't compare with silver's.

I already don't like volatility, and enthusiastic about the precious metals as money as I am, I'd rather not be an investor in them. I don't really like being an investor at all. I'd rather have been a plain old chemist focused on my career and saved my money in the bank.

I only started actually involving myself in markets some years after I had been investigating the market phenomenon, and 'discovered' the necessity of investing. Perhaps 'utility' is a better term than 'necessity,' as at the time I had not yet realized that money itself could not be trusted. It would still be some time before I would characterize it as a necessity, and an unfortunate one at that.

I'm getting sidetracked. The point is that I tend to view my investment in precious metals as something that is going to protect me in a time of trouble, or to help carry my accumulated savings through the financial turmoil. I do not want to see my investment plummeting like a stone at just the time when I need it most, even if it means that I may also miss out on the manic periods when I might see massive gains over a short period. That's not why I'm buying the stuff, and gold is already more volatile than I would like.

I'm not a trader, and I don't want to obsess over day-to-day movements of my assets that can amount to a large fraction of their worth. So, I prefer the buy-and-hold Steady-Eddie of the two. I know I'm not going to get rich by it, but that is okay with me. I have no delusions about that.

I also have no delusions about the fact that I may be holding on to my investments for quite a long time, or possibly need to dump them quickly. I have no delusions that there will periodically be large corrections like the one we just saw, and that possibly the boom will end with a devastating crash, especially if Washington goes bankrupt and the banking system fails. This doesn't rattle me. I feel comfortable enough with the functions of the banking system that I will be able to tell when it's the real deal, and when things are just temporarily wonky.

Like right now.  Besides -- if it gets that bad, what have I got to lose?

Inflation is here. It is not as bad as some think, but it is also not absent as the deniers claim. Unfortunately, today's money is something like a vapor -- mysteriously volatile, hard to define, at one moment confined to one space and the next seeping through every crack and crevice into new regions, all imprecisely and unpredictably. There is no one place or statistic to look at to know exactly what is going on.

I remarked earlier of the possible coming train-wreck between PPI and CPI, and that I thought producers would not be passing along quite as much of their price increases as they had thought. It looks like we just saw a bit of that, with producers solving at least part of the conundrum by 'bidding prices down.' There have also been some cases of lower earnings. Upstream prices were overbid. Somewhat. But even with their recent correction, they are still very high, and in the long term likely to continue to climb.

Those who look only at CPI or 'core prices' but ignore monetary statistics and commodities are probably underestimating inflation. Those who look only at commodities and the monetary base but ignore lending and prices are probably overestimating it. There are too many of the former in the stock market and too many of the latter in precious metals.

Both markets are loopy, and every so often weird stuff happens. Sobriety and nerves of steel are the best assets now. Slow and steady does it.