Batten Down the Hatches…

… the FED looks to be setting us up for a second major correction.

The Adjusted Monetary Base (AMB) has jiggered and jaggered back to flat over the last 6 months: 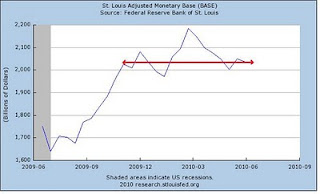 M1 appears to be flattening out after its stairstep: 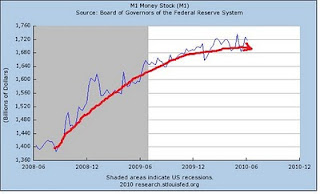 Once again, bald interest rates are meaningless numbers. The real issue is whether or not they are being suppressed. Don’t listen to Bernanke when he says the FED is being “accommodative” and cites the overnight lending rate. Look at the money statistics. The FED is doing no such thing.


Money supplies are flat. Approximately 0% is therefore a fairly accurate approximation of the current market rate of interest. There is something of a question as to whether any of this matters anymore, given that bank reserves are spectacularly high and not really historically comparable to anything previous. Even if the FED does not provide any new reserves, there are still plenty in existence right now to push up money supplies through fractional reserve lending. So does it matter that the monetary base isn’t increasing?

I think it does, for two reasons. First, simple supply and demand. Reserves are no longer increasing in supply, so on the margin banks will not find themselves any more willing to part with them tomorrow than they are today. And since they aren’t lending today, I suspect they won’t at all until reserves are increased and their “marginal utility” falls.

Second, a flat monetary base means the FED isn’t buying assets. In particular, it isn’t buying the banking system’s bad assets to improve their balance sheets. This means that the reported earnings of the banking system will not be propped up by the FED’s activities, at least on this front. This leaves the banks vulnerable to asset price fluctuations, especially in the housing market.

And, unsurprisingly, the housing market appears to be plunging back into the toilet. New home sales are down a staggering 33% in the single month since the expiration of the $8000 tax credit. Which really shouldn’t surprise anyone, least of all an economist, though for some reason such phenomena consistently do. Any economist worth his salt should know that a subsidy will push up prices and economic activity in a market, and that when it is withdrawn, prices and activity will fall. It isn’t rocket science. But for some reason, when you call it a “stimulus” instead of a subsidy, that magically changes things, and the “stimulus” may be withdrawn and activity will continue.

No such luck, Keynesian dimwits. The economic gods aren’t fooled by wordplay.

To top it off, the “Bush tax cuts” are set to expire at the end of the year, and there is some theorizing that economic activities are being pushed forward to realize gains this year instead of next. So, in all likelihood, today’s market is experiencing something of a “Bush tax stimulus,” ahem, “subsidy,” that will be withdrawn soon as well.

Last time it took over a year of non-expansion to wring a recession out of inflation addicted markets. I doubt it will take as long this time, and I would look for another major market decline before next spring. There may be one more mini-rally left, but not much more than that, I think.

But who knows what balance sheet magic old man Bernanke will pull out of his hat next?