Strange things are afoot.  The FED is two months into a quantitative easing campaign, the principle visible result of which appears to be, paradoxically, rising interest rates.  Commodity prices continue to climb, with oil over $90 a barrel, something I thought would not happen for some time.  The stock market barrels higher.  No correction appears in sight.

Elsewhere, Egypt is practically in flames, one Tunisian dictator has high tailed it out of town (probably to be replaced by another), with rumblings and grumblings of 'revolution' reverberating throughout the region.  As if an actual revolution -- with its implication of actual, meaningful change -- could really happen in that corner of the world, but I suppose hope springs eternal.

The motive?  A youthful movement for liberty and peace?  A dramatic ideological shift?  No -- high food and gas prices, coupled with despairing levels of unemployment.

Meanwhile, further East in that supposed rising giant of the Orient, China, one keeps hearing these rumors about tightening policy, and one keeps seeing headlines in evidence of quite the opposite.  No real estate bust so far.  Rising commodity and food prices.  No mass unemployment.

What the heck is going on?

What if things don't go the way even the best minds have guessed?  What if even common sense and patently obvious outcomes are confounded by actual events?


...The Dollar Actually Outlives the Yuan?

I think I may be the only blogger covering this, but the reality is that -- at least according to the data put out by the FED (more on that later) -- QE2 is not panning out as all it was cracked up to be.  It is finally showing up on the balance sheet, but not at anywhere near the levels advertised.  The uptick in the monetary base doesn't even reach levels seen a year ago.  To get some idea of the scale of what is apparently not going on, it might do to look at a graphical comparison of the two rounds of FED enforced bank reserve bloating -- 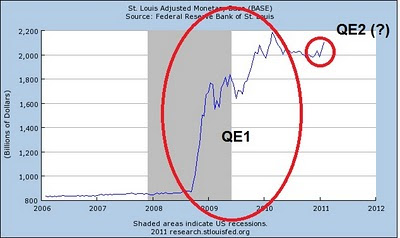 Note, once again, that because most of this 'high-powered money' has not filtered down to be multiplied in the monetary aggregates, it is not available to drive up consumer prices.  That will not necessarily remain the case, and as long as the money is present as reserves it threatens to filter down and drive up the circulating money supply dramatically.  But for now it is true that banks are only sitting on it, content to use it merely to remain solvent.

Meanwhile, the rest of the world -- and China in particular -- appear to have chosen to turn the money spigots on at full tilt.  This is an aspect of the situation which I think is being a bit neglected in an otherwise excellent discussion of how central banks ruin life for everyone else.  FED printing of US dollars cannot drive up the supply (or down the value) of foreign currencies, i.e. cause the phenomenon of 'exported inflation.'  Exported inflation occurs under the gold standard (and mercantilism), in which gold -- universally accepted as money everywhere -- flows disproportionately from one country into another trading partner, driving up prices in the one and down in the other.  But US dollars don't serve as yuan serve as euros the way that gold serves as gold serves as gold.  They trade independently of one another, which is why there is a floating exchange rate between them.  At least in theory.

However, foreign currencies can have their value destroyed if their respective central banks attempt to maintain a dollar peg and 'stimulate exports' by printing money and intervening in currency markets.  There seems to be plenty of this going on in what is perhaps the beginning of a dreaded 'race to the bottom' in a futile attempt to 'protect jobs.'

But is it possible that in this inflationary race to ruin, the other guys are actually winning?

What if countries like China are so absolutely commited to mercantilism that, rather than lend more money to the US that won't be paid back, they decide to fix the exchange rate 'in their favor' rate by inflationary destruction of their own currencies?  What if leaders there are so afraid of an Egypt-style melee as a result of recession and a housing market correction, that they go clean over the cliff of hyperinflation -- and get a conflagration far worse than they ever imagined?

Conventional wisdom has it that the dollar is doomed and that the yuan and China in general is the place to be, but there is ample evidence in my opinion that the Chinese leadership might be of a mind that is utterly committed to avoiding recession at all costs -- the major one being the yuan.  This is a nation led by engineers, men of formulas and statistics, not airy theory and principles.  Might they follow their faulty equations to their logical conclusions in a grotesque attempt to beat a reductio ad absurdum at a game of chicken -- in real life right before our eyes?

I don't know -- but the point is that it isn't completely implausible.  Stranger things have happened.  It is also possible that the FED is lying more brazenly than ever, and is simply performing QE2 'off the books.'  Smarter men than I have concluded thus, and perhaps we are all skipping straight to hell hand in hand.

But the price of precious metals tells a different story.  Until the Egyptian riots started, gold had fallen almost $100 an ounce in a prolonged 'breather' from its breathtaking bull run.  Meanwhile in China, gold bars are trading at an unprecedented premium.  And for all the Egyptians are complaining, to my knowledge Cushing, OK is glutted with the black stuff and West Texas crude has come completely uncoupled with the Brent variety.  Gas prices are high, but they haven't come close to where they were two years ago.  Where were the Egyptian rioters then?

George Friedman reports that Chinese manufacturers are currently 'earning' approximately 1-2% profit margins on their exports.  These profits are made possible by a subsidy to the tune of approximately half of the purchasing power of the remainder of the Chinese populace.  But in order to collect this subsidy, the purchasing power flows first through Washington in the form of subsidized government borrowing, then to American consumers in the form of government goodies and an overvalued dollar.  While this activity ostensibly weakens America by encouraging growth in the parasitic government sector and might constitute the pursuit of some sort of weird strategic advantage, this is not an efficient or tenable economic model for the long term.  George Friedman also reports that the American recession is 'over,' with which I disagree, but he is bearish on China for many of the same reasons I am and is actually optimistic about the standing of the West going forward in this century.

The fact is, the modern 'globalist economic order' is being driven primarily by two cooperating conspiratorial pairs -- Chinese manufacturers and politicians (pair 1) conspiring against Chinese consumers, using the expropriated purchasing power of their victims to drive disproportionate profits their way, and American politicians and special interests (pair 2), who conspire against American manufacturing in order to receive foreign financing for government spending that taxpayers won't willingly cough up (and probably never will.)

The global economic crisis is forcing this cozy arrangement to come unwound, more or less completely and rapidly, it seems.  And while I am aware of the immediate physical and economic threats posed by this disintegration, which have been discussed at length on sites such as this one and of which I am yet keenly apprehensive, still this leaves an important question --

The collapse of the beneficiaries of this system -- Central governments in Beijing and Washington, Chinese manufacturers and American political special interests, as well as heavily indebted governments across the remainder of the West -- is bad for the West in the longer run...how?  Is it a blow against liberty, or a blow for it?  Is it actually better to have crushing centralized governments and their corporate coterie draining societies of their resources?  How?  It seems to me that their impending bankruptcy would on the whole be a considerable improvement.  Immediate turmoil and bloodshed excepted, of course.

The West may be in a period of manifest decadence, but it is not dead and has a remarkable track record of internal, self-driven development, including the recent past.  It would not be breaking new ground in returning to a heavily individualist, entrepreneurial economy.  It would also not be a breakthrough in political thought to devise a legal system that respected private property and individual rights, more or less anyway.  It's been there and done all that.  The culture has taken a good roll in the slop, and there have been consequences, but as has been said, there's nothing wrong that couldn't be cured by a long, hard depression.  Maybe there's something to that.  The West seems to have caught a case of Orientalism from the East, but it is at least plausible that it could get over that simply by returning to its roots.

China, on the other hand, must either somehow make authoritarian Orientalism work in a way that it never has before, or undergo a complete cultural, economic, and legal makeover.  In the eighties, Japan was supposedly set to take over the world, right up until the point it went bust and didn't.  China was barely on anyone's radar then.  Now it looks set to go bust, possibly in a very big way, and though most of the rest of the world seems convinced that, bust or no bust, China is still a shoe in for taking over in the next few decades, I suspect it might just be a longer, harder slog than those people think.

I'm tired of hearing how competitive and knowledgeable and educated the East is in comparison to the West.  Life has taught me, at least, that know-how isn't everything and being 'competitive' doesn't always lead to outcomes one would like, a lesson I would think was not lost on people who call themselves adults.

It ain't over 'till it's over.  Who really knows how it will all pan out?