Well, we're approximately one month into QEII.  So...what's the score?

Hard to say.  The FED has conveniently stopped updating its handy graph showing the makeup of its balance sheet since about the time the program began.  I'm sure that an inquiry into this oversight would reveal that they are just a little behind because of the Thanksgiving holiday.  It's tough being a government bureaucrat.

Consulting the raw numerical data, we find that the asset base has indeed expanded since the program began: 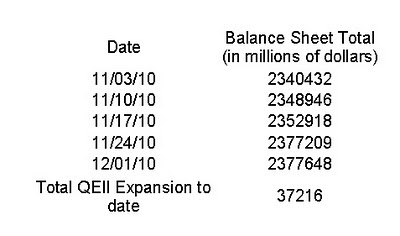 So, in the first month of the program, it appears the FED has added about $37 billion to its asset base, somewhat less than the $75 billion per month of new asset acquisitions it had announced.

But -- lo! and behold! -- the monetary base has hardly budged: 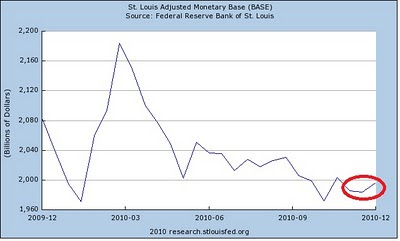 Forgive me for being unimpressed.  So far, QEII is proving to be far less than advertised.  Even the increases in the monetary aggregates over the last month have been mild.

Interestingly, Ol' Ben did a TV interview with an 'explanation' that sounds remarkably similar to what I guessed the FED might actually be up to (HT Vox Popoli):


Pelley: Many people believe that could be highly inflationary. That it's a dangerous thing to try.

Bernanke: Well, this fear of inflation, I think is way overstated. We've looked at it very, very carefully. We've analyzed it every which way. One myth that's out there is that what we're doing is printing money. We're not printing money. The amount of currency in circulation is not changing. The money supply is not changing in any significant way. What we're doing is lowing interest rates by buying Treasury securities. And by lowering interest rates, we hope to stimulate the economy to grow faster. So, the trick is to find the appropriate moment when to begin to unwind this policy. And that's what we're gonna do.

For once, it looks like he's telling the truth.

It looks as though -- for now -- the FED is trying to do 'quantitative easing' without the quantitative part.  Will the intermediate term interest rate suppression being engineered by the FED's asset juggling prove to be 'stimulating' without a substantial increase in the monetary base?  I don't know.  But it will be easy to tell -- watch the multiplier (MULT) and the money aggregates.

It's sure starting to look as though my initial skepticism was pretty well founded.  Investors who aren't paying careful attention may be in for a rude awakening here pretty quick.  I'm going to hold off from officially declaring QEII a fraud just yet.  I'll give it maybe another month or so.

Just remember, though -- you heard it here first!