I've already reported on the conflicting contraction of the monetary base with expanding monetary aggregates (M1 and M2). Now there's another twist -- despite the contracting monetary base, the FED is actually adding to its asset base by buying longer term Treasury debt -- 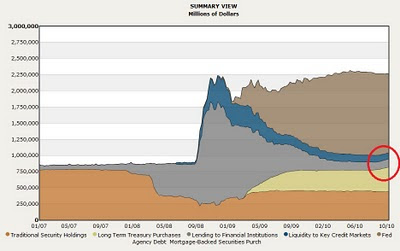 The base is still in contraction because the rate of new debt purchases is exceeded by shrinking holdings of mortgage debt. The net effect is to change the overall composition of the FED's balance sheet while the monetary base slowly contracts. (That's right, I said it -- the FED is deflating. The monetary base, at least).

What in the world is the FED up to?

Firstly, the FED is trying to push down long term rates, or at least wants to appear to be doing so. Supposedly this is to stimulate long term borrowing, but it is doubtful that this would accomplish much given that nobody knows what is going to happen next week, much less thirty years from now. Nobody wants to borrow (or lend) in this market, so it is doubtful that this will stimulate much of anything.

Two other things I can think of this move accomplishing indirectly -- allowing the Treasury to lock in long term low rates on at least a portion of its massive debt load, which will help alleviate some of the interest burden down the road when things get really nasty, and weirdly enough, boosting the market value of the FED's mortgage holdings. Since mortgage debt is also long term debt, a drop in long term rates will increase the value of these loans. Assuming, of course, that the loans are actually sound, which is questionable.

I don't really think that any of this is the real objective at this point, though. I think that the FED is boxed in and scared to death. It's just trying to get through the day, moment by moment. It has to have its eye on commodity prices, especially food, which have been buoyant of late, and simultaneously on unemployment, which is stuck at 9.6%. Commodity prices are screaming that price inflation is on its merry way, while in contradiction, unemployment is still uncomfortably high and going nowhere. The nosedive trajectory of the dollar on forex markets isn't helping the situation, either.

This isn't supposed to happen.

Couple that with the unusual rise in the money aggregates, and the FED has a fantastic headache on its hands. What to do, what to do?

Nothing, it seems, for now. All the talk of QEII ('quantitative easing, this time with feeling') is nothing more than blather. I'll believe it when I see it. The FED's meeting is on November 3rd and is being awaited with baited breath.  Right after the election.  Nice.  I'm guessing that it will disappoint, and markets will probably see a roller coaster ride this week, between the election and the FED's announcement.

Right now, the data says that the FED is in neutral and has been for almost a year, with a slight bias towards deflation of late to reign in the rising aggregates. It is improving its own balance sheet while twiddling its thumbs over the economy. But it won't be able to do this forever. Another major correction will put some real hurt on the banking system, and on Washington's finances. I don't think there will be as much patience with Bailout this time around. Washington will probably be less sympathetic with the banks supposing another such event comes, however, as of yet it has little control over the FED's asset buying activities. If we do see a major correction, then we might see a vigorous 'QEII.' But it will be aimed at saving the banks' chestnuts, not 'stimulating the economy.'  At least that's my guess.  Luckily, when the time comes we won't have to guess because we can just look at the FED's graphs.

The FED is trapped, and Washington along with it, with nowhere to go. They need low interest rates, low price inflation, and a booming economy, or else it's all going to go to the dogs. That's the danger of economic inflation addiction. Unfortunately for the banking cartel, we're late in the business cycle.They can't have all three.

Pay no attention to interest rates! Listen not to the man at the microphone! Just look at the graphs. As of now they tell us that the FED is setting the economy up for another correction. It is not happy with its bloated balance sheet and rising aggregates, falling exchange rate, mushrooming commodity prices, and looming price inflation. It appears far less worried about economic stagnation and unemployment. I'm still guessing that we'll see another correction by springtime, thanks to the FED's benign neglect.

It's clear where the bankers' sympathy lies -- with themselves. FED to the unemployed -- 'Tough beans.  We've got bigger problems.'